Welcome to the middle of the summer of 2020, the year of locusts, earthquakes, plague, riots and Saharan dust. God is trying to cut through the fog and get the world’s attention!
Like you, I was stunned that the old nemesis of humanity, “Racism,” rose up so wickedly again during the last month. I support police and law and order. I don’t support wrongful actions that lead to the death of anyone. But the George Floyd killing, following so close on the heels of the Ahmaud Arbery killing, was a catalyst for chaos and an indication of the need for more work in curing our culture.
One thing that clicked for me was the situation of driving and the red and blue lights of law enforcement blinking on behind me. In that situation, all my driving life, my
response has been, “Oh rats! I’m going to have to pay a ticket.” That is not the response of many blacks in the
United States.
Time and testimony have taught most black drivers that those red and blue lights might be the first sign of a terrible encounter with law enforcement, where they’re considered guilty before innocent, challenged, searched, physically assaulted or beaten within an inch of their lives. Or sometimes even killed.
I hate that. I hate that so many black parents feel the need to instruct their children about reacting to police. I hate that fear and suspicion. I want us all to be equal in the eyes of the law. I want us all to be respected as human beings. I want perfect police (which is unreasonable, but I still want it.)  When an officer of the law breaks the law, I want that officer to be held accountable. Why? Because I believe and know that we’re all God’s children, all God’s family.
Racism itself is a false construct. It’s powerful. It’s deeply seated. It’s a political reality (unfortunately). But it is false. And our good old book of Truth tells us so. The Bible teaches that all humans are descendants of Adam and Eve, meaning that there is only one biological “race.”   Geneticists agree. The Human Genome Project published a draft of their findings in 2000, about which the New York Times reported that “the researchers had unanimously declared there is only one race—the human race.”
From 2005-2006, four sets of fraternal twins (that we know of) have been born black and white.  Pictured below are the Singerl twins in Australia. DNA confirms that they share the same mother and father. The amount of melanin in their skin determines their skin color. It does not determine their worth. 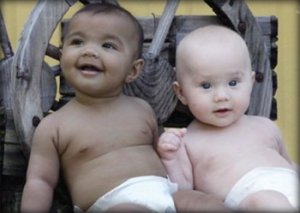 church won’t speak up, then Racism will roam through our land unchecked.  Let’s all try to learn from these terrible news events. Let’s be sure our children and grandchildren grow up celebrating diversity.

Stay positive and love others,