No Cover Up Here 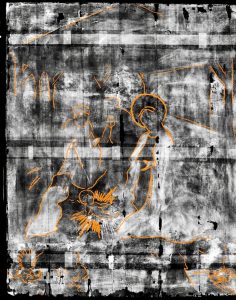 This image has been highlighted to show the outlines of images underneath. From Fox News.

Merry Christmas!
It’s Christmas Eve and all our guests have departed, stuffed with tamales and chili and desserts.
Tomorrow’s the big day. We rejoice in the good food, good gifts and good times. The house looks great! Two of the three kids are home, which is the best we could get this year. The other is serving the Lord in another country. We’ll Facetime her and it will be a blessing. One thing’s sure. We won’t cover up the true meaning of Christmas in this house or among our friends and family.
On Fox News this morning, I read about a 400 year old medieval painting of John the Baptist’s beheading. Originally painted on a canvas that was stretched over a wood frame, new analysis revealed that something had been covered up on that painting.
As art conservators studied the picture, which they found to be in deteriorating condition, they X-rayed the canvas. Underneath the picture of John the Baptist there was another image. It seems to have been an earlier painting, also depicting a Biblical scene, the Nativity scene!
The layers of paint revealed angels with halos, a baby in a manger and the outline of a structure that seems to be a stable. The three wise men may also have been pictured. See for yourself in the photo attached. It seems that the Christmas scene had been covered up by the John the Baptist scene.

What covers up Christmas today? What paints over the Babe in the Manger? What forces seek to remove that beautiful historical scene from our memories and replace it with Norad tracking Santa Claus, last minute deals, or movies and entertainment?
Secular holiday parties won’t depict the Nativity. They’ll ignore it.
Nativity scenes have been removed from the courthouse yards. They’ll display Santa, but not baby Jesus.
The media gave us Mr Rogers and Star Wars to distract us from the true meaning of Christmas, not to mention Elf, Grinch, White Christmas and Die Hard.
Where’s baby Jesus?

One thing’s for sure, John the Baptist would not have wanted the artist to paint him over the Christ. John’s faithful preaching pointed everyone to Jesus. “He must increase. I must decrease.” How often do we hear about people walking away from the spotlight? John was sent by God to glorify Jesus and point Him out to the seeking, hoping crowds. There’s no way John would ever have wanted to detract from Jesus.
When Christians don’t tell others about worshipping Jesus, we cover Him up.
When Christians don’t act like those whose souls have been saved, they cover Jesus up.
When Christians love the glittering goodies the World has to offer, Jesus is covered up.

At this Christmas time, on this late and sleepy Christmas Eve, I want us all to lift Jesus high. To bless others in Jesus’ Name. To attend church and to bring someone with you. Jesus’ nativity scenes will all soon be stored away for the next year. Jesus covered up in the attic, or in the shed. Jesus has been covered up, kept from our culture, too long.

Shine Jesus shine, from our lives, dinners, schools, classrooms and offices. No more cover up. No painting over. No ignoring.